Groundwater management was at the top of the agenda this month, and Directors discussed the Basin Boundary Modification application due to be submitted to the California Department of Water Resources (DWR) by June 30, 2018. The modification will align the State’s documented boundaries for the Montecito Groundwater Basin and the Carpinteria Valley Groundwater Basin with the existing jurisdictional boundaries for the two service areas. Notification has been sent to property owners for the small area included in and around the proposed modification.

“We continue to move forward with our SGMA efforts,” reported the District’s General Manager Nick Turner, “and we expect to review GSA formation in June.” The June Board Meeting is currently scheduled for 2pm on June 26 at the District office. The Carpinteria Groundwater Basin’s status also changed, and is now ranked high-priority. More information about the SGMA/GSA initiative is available on the District web site: montecitowater.com.

Engineering Manager Adam Kanold presented on current projects, describing the Sycamore Canyon Water Main Replacement as approximately 90% complete. Although the project’s timeline was disrupted over the winter, Mr. Kanold stated that the project remains “On budget,” saying, “We look forward to completing this soon, and know that the community is also eager to see it finished.”

Mr. Kanold also gave an update on seven emergency-related construction projects where temporary repairs to the water transmission pipeline were made following the January 9 debris flows. These projects are located at creek and/or bridge crossings damaged by the debris flows. The length of pipe to be repaired ranges from 40 to 200 feet at each crossing. The District’s goal is to have these projects designed, bid, awarded, and completed by this coming winter. However, the timeline of three of the projects, located on bridges, is ultimately driven by Caltrans’ schedule for completion of bridge reconstruction.

As of now, the estimated total for emergency related expenses ranges from six to seven million dollars. Expenses incurred for emergency response are currently being processed through the FEMA public assistance grants system for reimbursement. Future expenses will be reimbursed on a monthly invoicing period through CalOES and FEMA. With this context, monthly financials were reviewed and the District gave an update on the status of FEMA documentation requirements and pending reimbursements.

The State Water Project allocation was increased an additional 5%, landing at 35% this week. This translates to approximately 1155 acre-feet for the District, or the equivalent of ¼ of the District’s annual projected consumption. Limited incoming supply in tandem with low local rainfall means that conservation will continue to be a key point of discussion for the region, as the District targets an ongoing conservation rate of 30-35% of pre-drought consumption.

Looking ahead, the contracted Recycled Water Feasibility Study commenced in January and the consultants are currently working on drafting alternatives identified in the analysis. This phase will be complete this summer and the District will present findings at an upcoming Board Meeting.

The complete agendas and packets for all Board meetings can be found on the District web site: www.montecitowater.com. 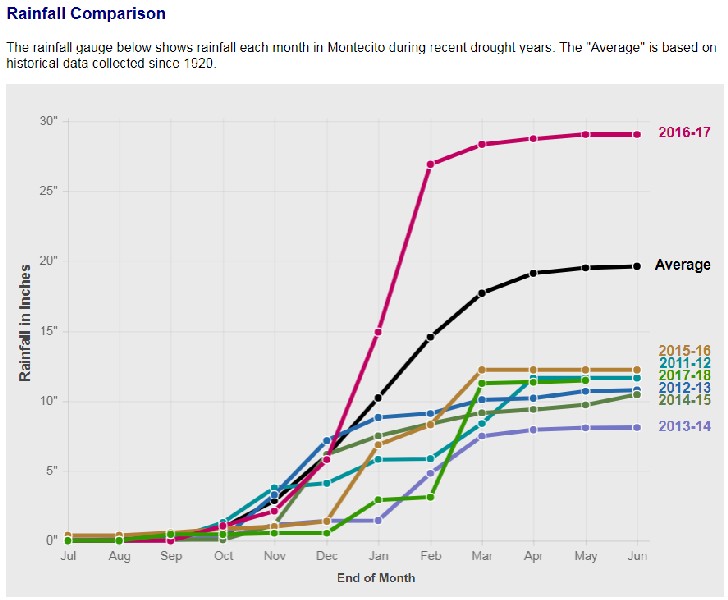