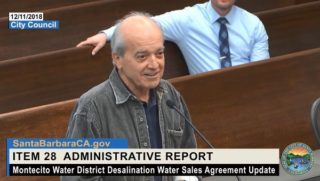 Floyd Wicks, President of the Board of Directors, Montecito Water District.

Last week Montecito Water District’s (MWD) Strategic Planning Committee met to review the current status of a potential long-term Water Supply Agreement with the City of Santa Barbara (City). Phase 2 negotiations resumed in late March 2018, spearheaded by Nick Turner, MWD’s General Manager. Staff has worked diligently and in earnest to arrive at the current draft terms, which were presented by District consultant David Moore of Clean Energy Capital at the December 5th committee meeting. Josh Haggmark, City Water Resources Manager, was also in attendance. These key terms, which staff representatives backed as mutually agreeable, represent significant progress through a process that has been reinvigorated by a renewed commitment in regional partnerships.

"The content and timing of the meetings emphasizes that the two agencies are working together closely, compatibly, and efficiently. At the staff level, we are hopeful that the terms will be viewed favorably and garner mutual agreement so that we can move on to the next steps: finalizing a term sheet and drafting an agreement. We’re striving for regional cooperation that will bolster the production and affordability of local, reliable water supplies for all parties," said Turner.

Key terms satisfactorily address a number of past sticking points, including duration of an agreement, source of water supply, and cost, as follows:

1) Duration: A 50-year term for the agreement is proposed, the maximum allowable under the City’s charter. Shorter terms were a concern in prior MWD discussions, due to the significant costs involved.

2) Source: The source of water supplied remains at the City’s option, which is understood as vital for their management of a complex water supply portfolio. MWD is guaranteed water that meets all federal and State primary water quality requirements. Ultimately, this increased flexibility of supply will work in everyone’s favor as conditions change over time, and particularly if the agencies cooperate more on regionally appropriate strategies.

3) Cost: A new cost structure has been carefully engineered by the two parties, and lands the estimated cost at approximately $2,700 per Acre Foot This is a moderate reduction from prior MWD estimates, and seems to better address the needs of both agencies in planning for fixed versus variable costs. The cost decrease is partly due to increased volume as the discussion now commits to 1430 Acre Feet per Year (AFY), an increase of 180 AFY. Greater volume would give MWD more water security, and help the City achieve efficiencies by running the plant at greater production levels. The cost may be even further reduced in years when a newly described “Take if Offered” (TIO) provision is exercised, which could provide MWD with additional water, up to 445 AFY, when the City has available supply. Depending upon quantities involved, costs may be comparable to State Water, however the reliability of this local source gives it much greater value.

The City Council received a comparable presentation at their meeting today. The meetings were scheduled in tandem with hopes that both presentations would garner agreement and that staff could return to their respective Boards in January with term sheets for consideration and possible approval to move forward with development of a Water Supply Agreement. Preliminary support was expressed in both meetings, and the process will move full steam ahead.

The calendar, agendas, and press releases can be found on the District web site: www.montecitowater.com.