Since the debris flow that occurred on January 9th, widespread reporting of inaccurate information has occurred. In advance of last week’s rain, Montecito Water District (MWD) responded to numerous customer inquiries about the functionality and condition of District infrastructure. The District provides this press release in an effort to alleviate concerns and disseminate accurate information. 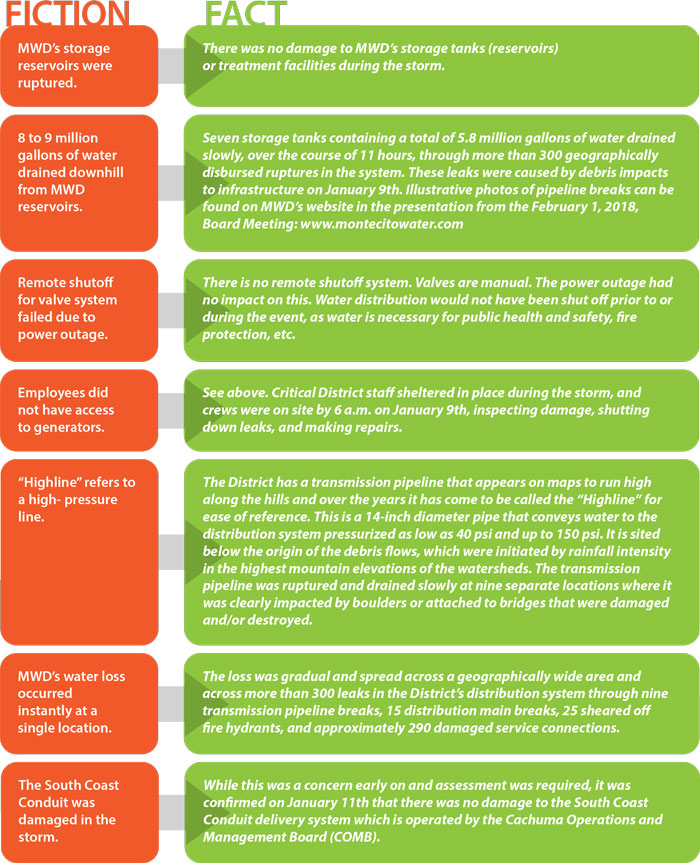 In the early hours of January 9th, Montecito experienced a storm of near record-setting intensity. Depending on the data source – National Weather Service, County of Santa Barbara or the National Oceanic Atmospheric Administration – rainfall met or exceeded a 200-year storm standard, dropping more than 0.5 inches in 5 minutes and 0.75 inches in 15 minutes. The rainfall was of extremely high intensity and short duration, resulting in significant amounts of runoff in the watersheds above Montecito.

Natural watersheds that feed the creeks that flow through Montecito cover over 11,000 acres and are of steep terrain, ranging from an elevation of 0 feet at the beach to approximately 3,600 feet at East Camino Cielo. The storm’s impact was intensified because the Thomas Fire in December burned these watersheds extensively. The Thomas Fire, the largest in California history, stripped the vegetation from mountainous hillsides, leaving little or no earth-binding root structures in place, and reduced the water-absorbing properties of the soil. Preliminary analysis indicates that nearly 200 million gallons of rainfall accumulated within the watershed during the first 15 minutes of the storm. In addition, the peak rainfall runoff intensity within the watershed has been estimated to have exceeded 14 million gallons per minute.

The high intensity rainfall caused mud and debris flows at the highest elevations in the watershed which accumulated while traveling downhill. This caused devastation within and throughout Montecito, including damage to District infrastructure. Water, mud, and debris overflowed debris basins and continued downstream, causing damage to the District’s transmission pipeline (“highline”) at multiple locations. Damage occurred at numerous creek crossings, including San Ysidro, Cold Spring, Hot Springs, Buena Vista, Romero, and Toro Canyon. Overall, District infrastructure was damaged in more than 300 locations, resulting in leaks through which a gradual loss of water occurred.

Review of MWD system data confirms that the District had approximately 5.8 million gallons of water stored in seven water storage tanks at the start of the storm on January 9th. The 5.8 million gallons of water was lost over the course of 11 hours, between 3 a.m. and 2 p.m. The loss was gradual, and leakage was spread over a geographically wide area and across the District’s distribution system through nine transmission pipeline breaks, 15 distribution main breaks, 25 sheared off fire hydrants, and approximately 290 damaged service connections; in total there were more than 300 leaks.

As compared to the peak rainfall intensity of 14 million gallons per minute, the District’s peak combined release rate was a mere 24,000 gallons per minute – less than one quarter of one percent (<0.25%) of the estimated peak rainfall intensity that fell during the storm. At the time of the first reports of destruction at 3:57 a.m., the total accumulation of rainfall is estimated at nearly 200 million gallons, while approximately 300,000 gallons is estimated to have been lost from the District’s water system by that time, again less than one quarter of one percent (<0.25%) of the rainfall figures. To put this amount in perspective, 300,000 gallons is a bit less than half the total volume of an Olympic size swimming pool.

Critical District staff sheltered in place during the storm, and crews were on site by 6 a.m. January 9th, inspecting for damage, shutting down leaks, and making repairs. While District access was prohibited in some areas due to rescue operations and debris, staff worked rapidly to organize a large team to assist and was able to secure needed materials without delay. Within 30 days of the event, the District had restored full water service to the Montecito community, including all work to access, repair and disinfect its heavily damaged facilities. These facts are provided by the District to help facilitate customer understanding of the storm’s impacts. As the community continues to be restored, MWD is here to help. 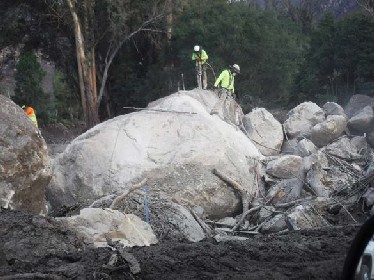 Access for damage assessment and repair was impeded by debris in some areas. Photo Credit: Montecito Water District. 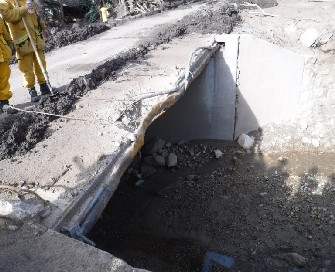 Crews look over a damaged water main and other utilities at a bridge crossing where the imprint of a boulder is clearly visible. Note scale of pipeline as indicated by workers’ boots. Photo Credit: Montecito Water District. 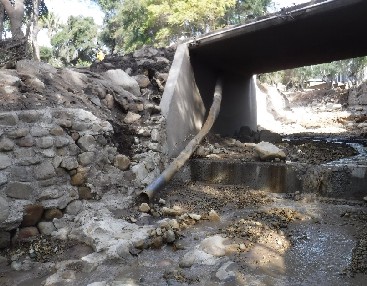 This distribution pipeline break at a creek crossing was one of more than 300 identified system leaks created by the January 9 debris flow. Rivers raged during peak rainfall runoff, leaping banks and in many cases cresting and destroying bridges. Inflow from even the largest pipeline would have been negligible compared to runoff flows. Photo Credit: Montecito Water District. 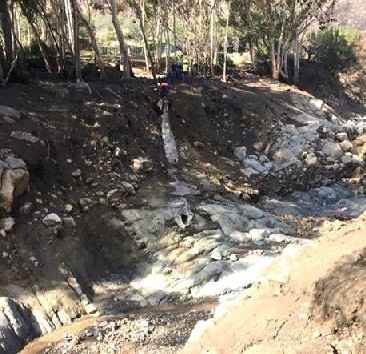